Added on Sunday, 2011-07-31 10:05 CEST in category Moscow
A few weeks ago I started having an unexplicable lasting slight fever, so in order to get diagnosed properly, I was hospitalized.

I was brought to the hospital by ambulance, with sirens and this typical Russian governmental car horn that means as much as "you'd better get out of the way". (No wonder people don't let ambulances go, if they in turn turn their sirens on, just to not to have to stand in traffic jams.) I was relieved when I got out, after waiting another 15-20m at the entrance of the hospital, because the guards didn't want to let the ambulance through initially…

The hospitals apparently have very good (and friendly) medical personnel and equipment, I apparently lie in the hospital where the likes of Putin and Medvedev are treated, but from the looks of it you'd think you got stuck in the '60s' Soviet Union: 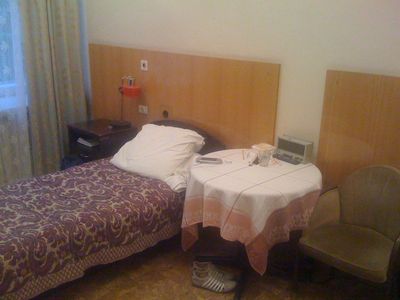 Hospitalization is usually planned, so you know when you have to go there, and can pack beforehand. In my case it wasn't, so I arrived with my backpack and that's it. Apparently you pretty much have to take everything yourself, including a beker, plate and cutlery, towels, toilet paper and pretty much anything else you might need. There also wasn't any potable water, just tea. To top it off, I had just missed dinner… I was lucky the friendly nurse gave me her food, but I do doubt this is the kind of place Putin would go to :)

To make things worse, I was told my wife better not come by in the evening anymore, because then the dogs come out of the forest and start roaming the hospital grounds, where they may attack you. They also mentioned something about hooligans, didn't quite get what that was about. So yeah, welcome to Mother Russia :)