Added on Tuesday, 2010-05-25 13:49 CEST in category Programming
I've just released the first version of my PSP Tone Generator (source included). It can create up till five simultaneous tones ranging from 20Hz to 10kHz. It also shows a visualization of the sound waves: 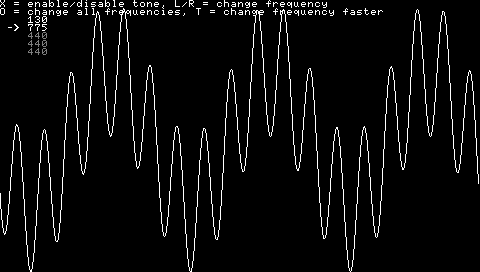 The PSP has support for semaphores, but I found these worked too slowly, which produced an annoying rapid tick from the speakers. Instead I decided to go with a simple binary semaphore: int mutexFull = 0.

The consumer of the sound waves waits while mutexFull = 0, because the buffer is still empty. When mutexFull = 1, it stops waiting, it reads it all out again and sets mutexFull = 0.

This fulfills the three basic requirements of mutual exclusion:
The only downside to this is "busy" waiting (each thread is paused for a millisecond at a time). The property of the above solution that the threads have to run interleaved absolutely one-to-one is not handy for a general mutual exclusion algorithm, but in this case that's exactly what I want: the producer writes, the consumer reads, and so on.

Have fun playing around with it :)