Added on Friday, 2017-09-29 21:58 CEST in category Traveling
A few months back we were invited to a wedding on Sicily, and since neither I nor my wife had been there yet, we planned a small vacation around it as well :) This was our first trip on which we took our daughter on a flight, which made the experience quite a bit different than before.

We made sure to be at the airport well in advance so as to have ample time for diaper emergencies and the like. This turned out to be quite unnecessary, as we could skip most of the lines, and ended up at the gate an hour and a half in advance, despite our stroller getting stuck in the x-ray machine :P

Our daughter behaved just splendidly during the flight, and soon we arrived on Sicily. Already on our very first drive to the apartment we figured driving here wasn't going to be easy: we missed an exit, and spent half an hour extra driving along tiny roads through coastal villages to get back…

The next day started a lot better with sun, sea, and beach! :) Even though in mid-September the Mediterranean Sea starts to cool down, the water was still a rather pleasant ~24°C. After a short swim we headed off into the mountains for lunch with a view. 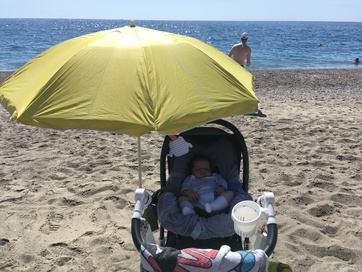 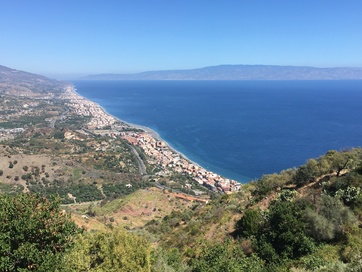 After lunch we headed to the 2nd city of Sicily (by population): Catania, which boasted quite some nice architecture and ancient remnants. 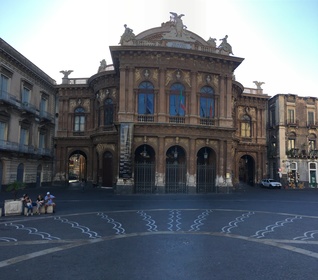 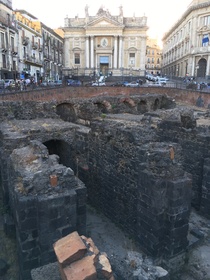 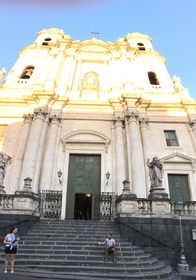 The food was very good as well, so we indulged in gelato and biscotto con mandorla (cookies filled with almond paste). Unfortunately the city had a less pleasant side as well: aside from the main tourist attractions, most streets in the center were completely covered in graffiti. (We didn't notice this in small towns at all.) 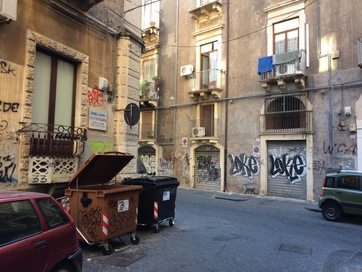 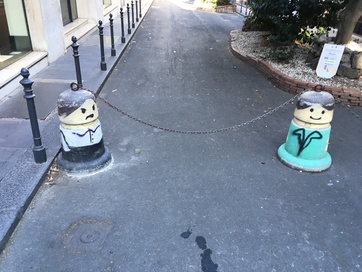 Admittedly the one on the right is kinda cute :), but the majority were awful tags that gave the city a very dirty feel. And I haven't even gotten to the worst part yet: the traffic… Oh my goodness… Moscow and Paris fade in comparison to the awful driving experience we had on Sicily.

TL;DR: traffic on Sicily is awful, and like I tweeted before, I have a theory that on Sicily, if you buy three boxes of corn flakes, you get a free driver's license. Sicilian drivers are nuts. So there :)

First off, the freeway: the roads themselves are quite OK, but then again: we paid toll. The amount of speed limit signs, though, is staggering; the speed limit seemed to change every few kilometers or so, and seemingly arbitrarily too. Certain stretches in the middle of nowhere were limited to 80 instead of 130, sometimes only for a hundred meters or so, when they would suddenly change to 100, or 120, or back to 80. I have a suspicion the local government ordered too many speed limit signs at some point, and decided to just randomly place them along the freeway.

They also love placing these in towns it seems. I kid you not, I have seen all of the signs below multiple times.

Not that these speed limits mean anything; the average driver would hold a steady pace of anything between 60 and 150 km/h.

Instead of just low beams, the Sicilian driver may choose the following lighting options at night: no lights, low beams, high beams, fog lights. (Unfortunately the last one holds true for pretty much entire Europe. It's a pity these drivers don't realize turning on the front fog lights does not turn on the rear lights, making such cars difficult to see from behind.)

Driving in the mountains

In order for truck drivers to get at least a bit of a move on on mountain roads, they like to drive against traffic so as to widen their corners, with little regard for who's behind them. This makes it very difficult and dangerous to overtake. (We really should stop renting the cheapest cars available, though. In the mountains I already spent most time flooring the car… :)

Driving in the city

The following traffic regulations are optional: stopping at a red light, giving way, indicating, merging like a zip, driving in only one lane.


So if there's just one thing you take away from this rant, then it's this: if you ever go to Sicily, don't rent a car, unless you've got nerves of steel :)

Taormina felt very different from Catania: there weren't a lot of big, impressive sights, but the overall feel was way better. Parking was very easy: there are two huge parking garages at either end of the town. The center follows one main street, with some quaint side streets. 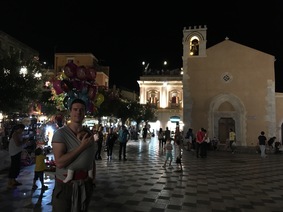 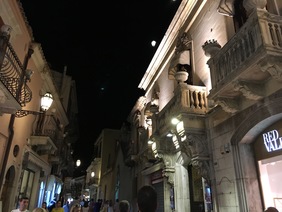 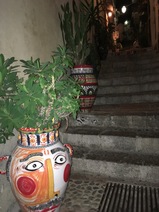 In antiquity Sicily was extensively populated by Greek settlers, giving rise to the region of Magna Graecia. Their remnants can be found all over Sicily, e.g. in the town of Syracuse. (Yes, that's indeed the Syracuse, from antiquity, birthplace of Archimedes.) Even though some of these ancient remnants, like the Cathedral of Syracuse, have been rebuilt, their original structure can still be seen. 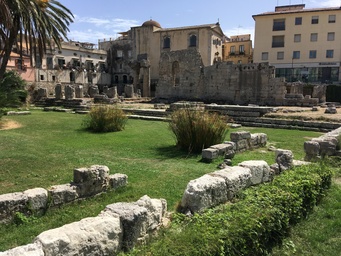 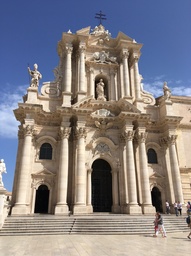 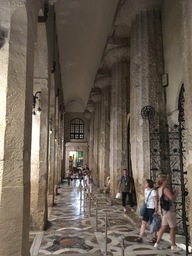 From wherever we had been on Sicily so far, we could see Mount Etna, the tallest active volcano in Europe. Every day we could see fumes coming out, although on some days more than on others. (The last eruption was only half a year ago!)

Because of its enormity it took a while to get there. We first drove up, which took about half an hour from the base, after which we took a ride by ski lift. 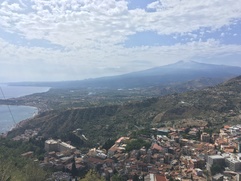 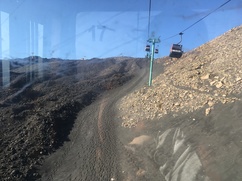 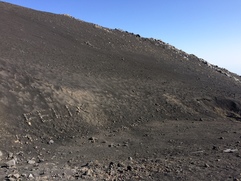 That only brought us to 2500 meters, or some 800 meters from the summit, but even there the weather had become considerably colder at ~10°C, and very, very windy. Unfortunately, the view was partially obstructed by clouds. It was possible to take an off-road bus to the summit, but with our daughter we didn't think that'd be a good idea :)

This was also the first place where we came across Chocolate of Modica: chocolate made according to an ancient recipe, inspired by the Aztecs. Sounds fancy, but it's not really my thing: the sugar isn't dissolved into the chocolate, giving it a very gritty texture.

Valley of the Temples

Close to the town of Agrigento we visited the valley of the temples, the "largest archaeological site in the world".

We'd heard that Sicily has more ancient Greek remnants than Greece itself, which is only corroborated by the size of this site. 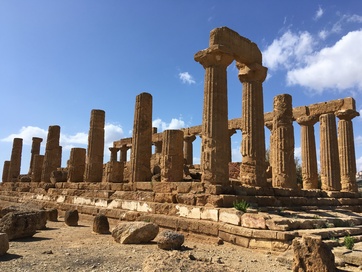 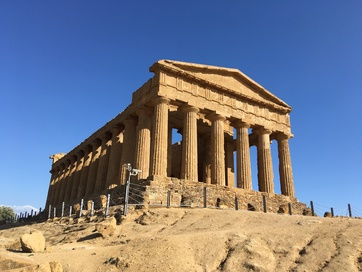 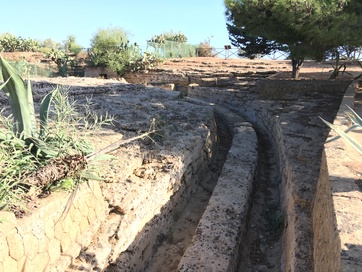 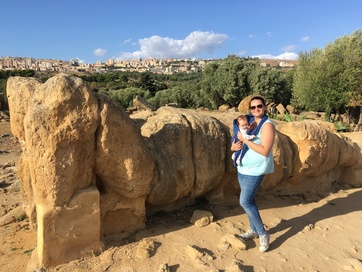 (You can see the temples of Juno and Concordia, and the remnants of an atlas.)

That day we also managed to pop by the Scala dei Turchi (Stair of the Turks), a beautiful white rocky cliff. 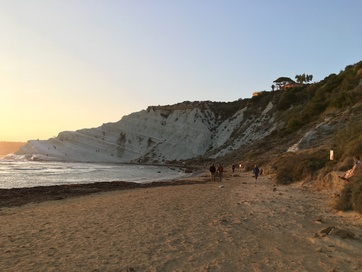 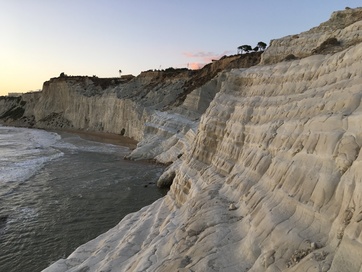 On our last day on Sicily we decided to visit its capital Palermo, and boy, did we regret it. See the ellipsis at the end of the title there? That about sums it up…

My wife had found a supposedly fantastic pizza place somewhere in the outskirts of Palermo, where we decided to go for lunch. As she entered she was greeted by about 20 Sicilians all shouting at one another, and she somehow managed to make her order.

In the meantime I tried to park, but couldn't find any spots on the streets. When my wife came back we found a nearby parking garage, but the place was so small we could only park there if we'd be so kind as to leave the car key to the shady guy running the place. No, thank you! The second parking garage we found had the same problem, so we instead opted to eat in the car. The pizza turned out to be just so-so.

As we drove towards the center along the heaps of trash that adorn the sidewalks, we decided that instead of walking around Palermo, we would just drive to the few sites we wanted to see. Mostly that worked out quite well, and there were quite some nice attractions indeed, like the Palace of the Normans. At some point, however, we got lost in the tiny streets. Google Maps proved quite useless suggesting we drive into fruit stalls and pedestrian areas, but after having seen probably all of the alleys in the city center, we finally found our way out.

There, have a nice picture of Palermo. We took it when we accidentally drove into a pedestrian area. 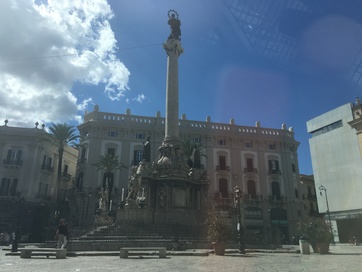 (The only one not regretting having gone to Palermo was our daughter; she slept through the entire ordeal :P)

Lucky we still got to catch a bit of sun, sea, and beach when we got back to the apartment :) Overall I would say that except for the awful traffic and Palermo, our trip to Sicily has been very nice, with lots of culture; sun, sea, and beach; great food; and fantastic ancient architecture.

Fortunately, Palermo didn't conclude our trip. On our way back we visited my wife's friend Laura, who lives in Milan, with whom we took a day trip to Lago Maggiore. 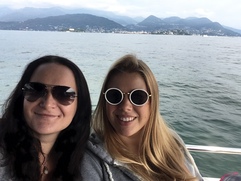 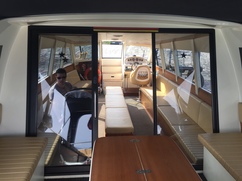 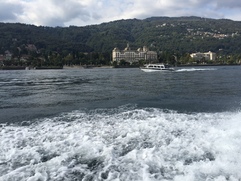 The captain brought us to the islands Isola Bella and Isola dei Pescatori, where we enjoyed the catch of the day and surprisingly good gelato. My wife and Laura also visited the ostentatious Palazzo Borromeo. 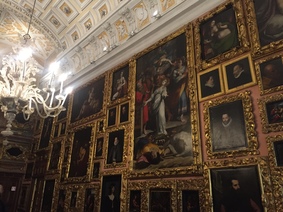 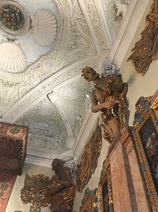 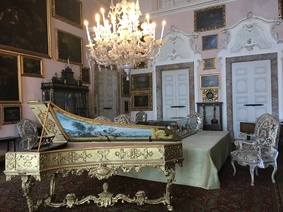