Added on Monday, 2010-12-06 19:19 CET in category Moscow
Usually it's me adapting to all the strange and peculiar things in Moscow, but for once I thought it'd be nice to have it the other way around, by bringing a Dutch tradition/holiday to Moscow: Sinterklaas! For those not in the know, Sinterklaas is the both the name of the person and the most popular Dutch holiday, celebrated on the evening of December 5th. "Legend has it" that Sinterklaas arrives by steam boat from Spain with his helpers called "Zwarte Pieten" to bring presents to all those who have behaved well that year, while riding his gray (a white horse) over the roof tops.

But for the skeptics there's another way to celebrate, by drawing tickets. Each person draws a ticket with somebody else's name on it, and buys that person one gift, without revealing whom the present is from, because the idea is that it is Sinterklaas who has come bringing gifts. The evening usually involves somewhat corny Sinterklaas songs and lots of chocolate candy, chocolate milk, marzipan, spiced nuts and "speculaas": 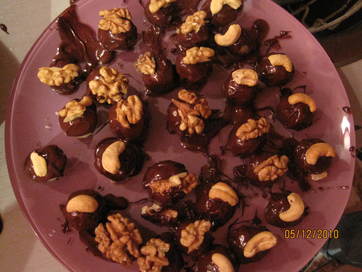 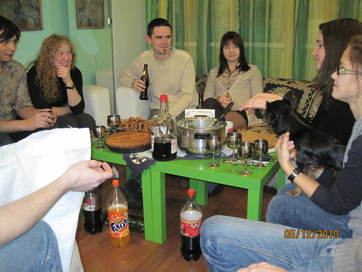 Because spiced nuts and speculaas are not for sale here, we decided to make them ourselves :) To top the evening off, we served the oh-so-very Dutch raw endive stew with bacon and sausage :)