Added on Wednesday, 2013-07-10 23:08 CEST in category Traveling
In June 2012, when we still lived in Moscow, my brother-in-law got married in Prague, so we took the opportunity to travel around a bit. We decided to go to Styria, in the south of Austria.

When we were visiting, we found out it's possible to dive in the Grüner See, and to make use of the isolation tank in the Museum of Perception in Graz. Unfortunately, I couldn't make it to either…

A year later, though, last weekend i.e., we decided to go again, this time taking friends with.

Diving in the Grüner See

Diving in land-locked Austria, that must be interesting :) As it turns out, it is! The Grüner See fills up with snowmelt during spring, and the water level rises so much that it covers the surrounding park.

When we got to Styria we first picked up our diving gear. The water in the lake is only 6°C or so, so we needed a lot of it too: an undersuit, a normal wetsuit, an ice vest with hoodie, gloves, shoes, fins, the whole shebang :) And that's besides the standard equipment: BCD with 14kg of weights, air tanks, diving regulator and dive computer.

Imagine then having to walk the ~100m from the parking lot to the lake while carrying ~30-40kg of equipment in a tight wetsuit, and then having to put your fins on. Not great… But then, once we treaded water! 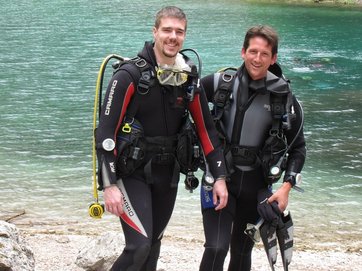 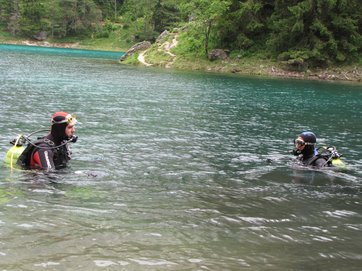 Underwater we didn't have a camera, so just imagine you're going for a stroll in the park, enjoying the sun while you sit on a bench or lie on the grass, when you suddenly see a school of fish swim by. Incredibly, incredibly cool! :D For at least something of a visual, go check out some images on Google.

Afterwards we headed to Graz, to the Museum of Perception to try out their isolation tank. I'd read about them a few times, and thought it'd be a great new experience to try out.

When I closed the lid, I lay down, bounced back very slowly a few times (I didn't lean/rest against anything after all), and then lay still. At first it didn't feel like anything too special, if I didn't close my eyes I could still see a bit, and even with ear plugs in I could hear a faint buzzing sound in the background.

After another while I could feel my hands tingling a bit, and if I focused well, I could feel my heartbeat. But that was really that. It was very relaxing, but I had expected more. Perhaps some "imaginary" sensations, but unfortunately nothing of the like happened. Some people apparently relive past moments in the tank. I think I'll stick to lucid dreaming for that (it's a lot cheaper too :P)

The last day we decided to reeelaaax, in Rogner Bad Blumau, who were having a Foursquare special: leave a tip, and get free VIP service with chocolate fondue and champagne! :D

Floating on foam bars in 36°C thermal water while listening to underwater music was the perfect end to a perfect weekend out :)