Added on Sunday, 2011-07-17 22:36 CEST in category Moscow
It's been well over a year, but of course it had to happen again: today we had another traffic accident…

As is common in Russia, if a lane is a bit wide, or has an emergency lane next to it, then that extra space is pretty much always used, especially when traffic is a bit denser. It is also often used by people who don't want to wait for everyone else and who cut off whomever they can. This happened today, so we crashed: 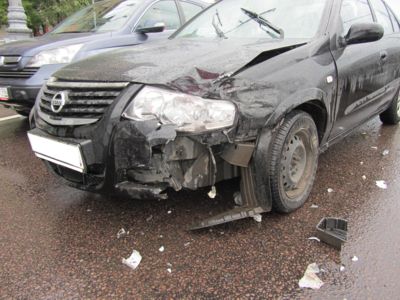 We're all OK btw., but it does look pretty nasty… From the traffic situation it was obvious it wasn't my fault, but unfortunately the other driver didn't agree. He said I should've swerved and evaded, possibly hitting whatever other traffic was coming. Right :) We now both have to go to the police station to fight it over…

After a changed tire we could fortunately go on our way, after the obligatory paperwork of course, and make it (somewhat) on time to the Miss Maxim 2011 contest :)

Update 2011-07-21: as was somewhat to be expected, the other driver didn't show up at the police station. Though there he was found guilty of crossing a solid line, not giving way when a priority sign was clearly visible, moving to a another lane without giving way and the accident itself he'd be given a "stern warning" and no fine whatsoever… Well, that's Russia for you. Whether it was laziness, unwillingness or fear for people with lots of money from the side of the police we'll never know, but there you have it.