Added on Wednesday, 2014-03-05 22:51 CET in category Traveling
Another winter, another chance to ski! :) After our move to Rotterdam last autumn we still had a few loose ends to take care of: because of all the moving and traveling we could only take our cat with now, the car still had to be exported and we had to cancel our Czech health insurance. (Of course it's always nice to meet up with our friends in the Czech Republic as well :) Since we had to go to Prague for a week anyway, we decided to pack up, take my cousin with, and head off into the mountains!

Ever since our class last year I had only gone skiing once: on a slope steep enough for "pizza" to not work anymore, which nearly gave me a panic attack as I raced down the hill… :) My wife hadn't skied at all anymore, so it was clearly time for more classes.

Unfortunately, by the time we got to the ski slopes, most slopes were closed: only one of the red slopes was open for the evening. My cousin (a seasoned skier), and me (a beginner at best :), decided to go for it and see how it goes. A few scary moments followed by a few nasty falls proved that red was exactly that: not to be trifled with…

The classes the next day were very fruitful, though, so the instructor took me down the blue slope. Another few goes and I finally started to get the hang of it, but not before I got rid of my mental block: I had associated skiing with speed skating, which works well on flat snow. You move your skis pretty much as you would your skates, and off you are. But the problem with speed skating is that you only ever go left. As a result, turning to the left felt perfectly natural and went well. Turning to the right, however, proved pretty much impossible. My (dominant) right leg kept wanting to be involved, I kept getting stuck, or worse, kept falling…

It wasn't until I started putting my hip in one week later, that I felt something strangely familiar: moving left or right feels just like making a side kick :D So remember kids, skiing is just like taekwondo :P After a bit more practise with my new-found analogy, getting down Czech Republic's longest downhill ski slope (over 3km) became really, really fun :) 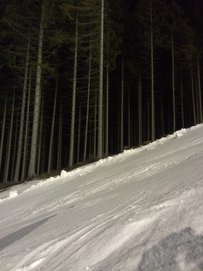 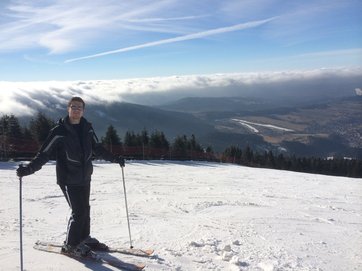 Baby steps, but getting better :)