By the time evening fell we were making our way up north to Gisborne, where we would be spending Christmas with Lee and his family. Although New Zealand is not particularly large (similar to Italy or the United Kingdom), it is quite mountainous, and the roads are often anything but straight. This makes for amazing driving, but in complete darkness it can be quite tiring too. Luckily 15 minute power naps do wonders :)

After a short and warm welcome we went straight to bed, so that the next day we could enjoy something very unusual: Christmas on the southern hemisphere! It was a beautiful sunny summer day, about 25°C, with a slight breeze blowing through the house, … and a Christmas tree with presents in the room :P

The entire experience was very mixed: there were plenty of familiar elements, like Santa Claus (dressed overly warmly…), lots of food, lots of presents, and a cozy family feeling, but the weather made it a lot better than that. E.g., Lee's mom has a few sheep, and it's great fun chasing them around :P (They're really fast!) 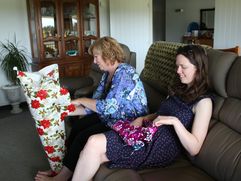 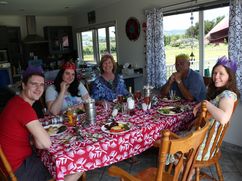 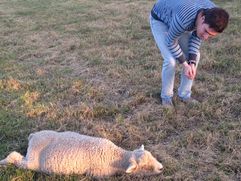 Well, i.e., until one of the younger sheep started to suddenly walk instead of run, and then just fell down… I guess the "excitement" got the better of him, but after a few minutes he was fine :)

It was great to see Lee again, and to meet his family, but it was even nicer to go do awesome stuff together :) Lee took us to a nearby river, the river bed of which had become a slippery slope over time: awesome to slide down from on a bodyboard! :D 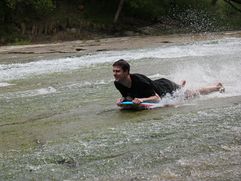 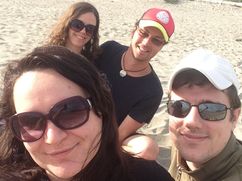 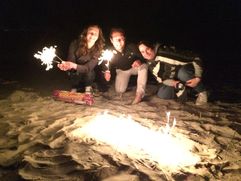 We also lit some fireworks on the beach, and ended a great Christmas day stargazing under an unfamiliar, but amazingly beautiful night sky. (The southern hemisphere has a completely different night sky. Also, stargazing through binoculars is so much more detailed and thus so much more awesome!)

After our goodbye the next day we made our way down south to the Tongariro national park, famous for its Tongariro Alpine Crossing: a ~19km hiking track.

We started our hike early in the morning, when it was still cloudy and cold. "Bring four layers of clothing and rainwear!" we were told. Soon after the sun came out, and the rest of the day we didn't need more than one layer. The weather and visibility were perfect, and the wind relatively calm. 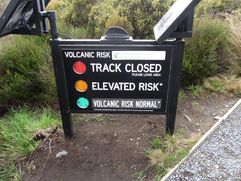 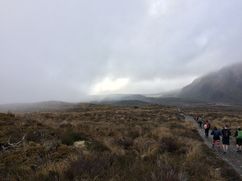 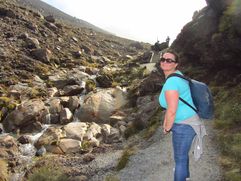 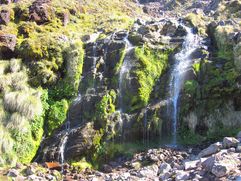 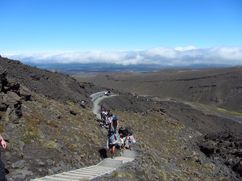 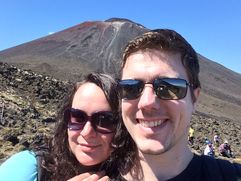 Those pictures were taken when we were still happy and in high spirits, just a few kilometers in. A while further we came across a very interesting side track: up Mt. Ngauruhoe, used as one of the locations for filming Mt. Doom in Lord of the Rings!

The mountain is quite steep, so we decided I would climb it by myself. The loose stones ("tephra") and 45° angle quickly made the way up exhausting, so I needed to rest a lot… Two hours later I finally made it to the top, providing me with this spectacular view: 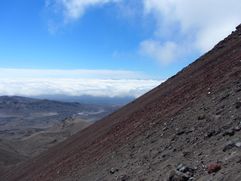 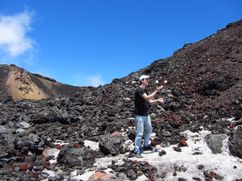 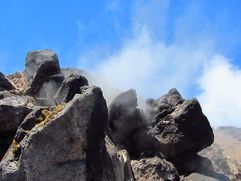 Steep, isn't it? The top of the mountain has some patches of snow left, so I thought it'd be fun to juggle some snowballs on top of Mt. Doom :P

Btw., those aren't clouds on the last picture, that's steam coming from one of the mountain's vents. It's quite pleasantly warm in its vicinity.

After a last glance down Mt. Doom's crater (nope, no lava and no ring) it was time to head down. Climbing up a 45° slope was an immense task, but climbing down the same way proved pretty much impossible: facing up you can hardly see where you're going, but facing down you constantly lose grip and can't hold onto anything. It was only after a while I reached a very narrow path pretty much everyone else was taking down: stones mixed with ground, which you could slide on: 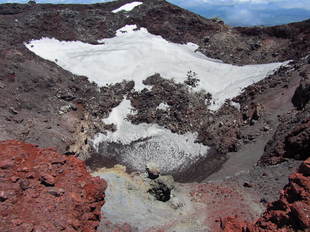 Going down is a lot harder than it looks, and took about 40 minutes. By the time I had gotten back to the start of the side track I was absolutely exhausted… I figured since I had reached the summit, the remaining ~13km I'd be going down, and would easily catch up with my wife. Not so… After Mt. Ngauruhoe there was another, albeit way smaller, mountain to climb, and then another one, and although the scenery was stunning, at the end we just didn't care anymore… It was simply too much and too far. We were completely depleted, and it had been a while we were so happy to see a parking lot :P

In the end it was worth it, we did have an amazing day, but next time we will be sure to check not just for length, but for elevation as well.

The day after we visited the Waitomo glow worm caves, famous for its, well, glow worms :P No photography allowed, so here's Google to the rescue.

We also visited the Kiwi House, where they were just about to feed their kiwis. Much to my surprise, the kiwis turned out to be a lot bigger than expected, reaching about 40cm, and great fun to watch when they were fed.

The main reason for there being so few left are the predators that were introduced when the Europeans came. Kiwis evolved without them, and their main mechanism of defence to stand very still can hardly be called effective…

Because driving on the beach can be treacherous, we took a bus tour. Our first stop was, well, simply on the beach :P The tide was coming in, creating a very unusual effect. Normally, when a wave comes in, it takes just seconds for it to roll back. Not here: the beach was so flat that the water just kept on coming, creeping ever forward, until it had covered about 30 or so meters which just minutes before was beach. 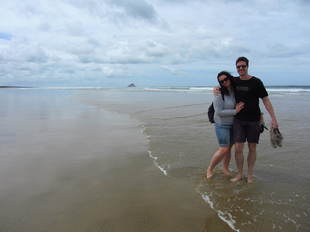 The next stop was by far the best, though: next to a high sand dune. We were given bodyboards, and off I went up the (25m high or so) dune. Looking down from the top was a bit unsettling at first, because you have no idea how fast you can take the sudden angle at the base of the dune. So yes, I braked the first time… The angle was a lot more doable than I had feared, so after that all brakes were off, woohoo! :) 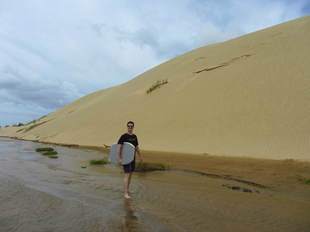 Ever since my wife and I met we celebrated New Year's with friends and family, usually in Moscow. Not so this year: we saw in one of the first New Year's on the planet (New Zealand is currently in UTC+1300!) with a romantic dinner and cozy evening, just the two of us :)

As you can tell New Zealand is great if you're looking for an active vacation. Every day brought us new amazing experiences, about which you can read more in part 3 (coming soon), in which we'll head to the South Island.