Added on Thursday, 2015-01-22 19:39 CET in category Traveling
Last year for New Year's I called my friend Lee, who used to live in Moscow, but is now back in his home country of New Zealand. Since New Zealand was then 9 hours ahead of Moscow he had already gotten up, and had greeted one of the first sunrises in the new year.

We hadn't seen each other in person after he had left Moscow a year and a half before that, so we decided to meet up, in a year, for Christmas and New Year's in New Zealand! :)

Since from the Netherlands you can't really travel any further than that, the trip there and back was going to be long. Very long. So long in fact, that we're unlikely to go back any time soon. Which is a pity, because the country is amazing! We were there for three weeks, and loved every minute of it :)

This has been our longest and most intensive vacation so far, so to spare you too long a read in one go, I'll split it up in several parts. First off:

Already in the Netherlands we started to slowly get used to New Zealand time, by waking up earlier and earlier: on the day of the flight we got up at 2:00 (at night, i.e.), so that by the time our flight left during the day we would be tired already, and sleep all the way through.

The reason we chose this tactic was easy: the jet lag from flying east is worse than flying west, because the days are shorter (~18 hours instead of 24), and you simply won't fall asleep earlier than usual. This is exactly what we noticed when we returned from the U.S. and the ABC islands: the jet lag when we got back home was the worst… So instead we opted for acclimatizing already at home, to make sure our vacation would't start with an enormous jet lag.

Wikipedia does mention it's easier to assume a 12h westward transition than a 12h eastward transition, but in our case that didn't work: we had a 10h stopover in Taipei, in the east.

The airport at Taipei is so nice :) They've got free WiFi, free charging lockers, and lounge chairs when you wait for your flight.

Instead of being stuck in transit for the entire day, though, we paid a visit to our friends Jeremy & Rebecca, who live there. We visited "The One", where we tried to play some Chinese games:

After another 12h or so in the plane we had finally made it to Auckland. Shifting our sleeping rhythm in advance worked wonders: together with the crappy sleep we had in the plane it made sure we were pleasantly tired by the time evening fell :) But before that we picked up our rental car. And guess what side of the road the New Zealanders drive? That's right, the other one…

Before heading out into the big city, I thought it wise to try a few "practice laps" on the car rental parking lot.

To go short: driving on the left is weird… At first, of course. You pretty much have to throw half your driving instincts out the window, and start again: Before driving off I straightaway tried to get in on the wrong side of the car; obviously the steering wheel is on the other side as well :) But not only that:

Auckland is by far New Zealand's biggest city. About 30% of New Zealand's population of 4.5 million lives there. They also have a fantastic skyline, as seen from the harbor cruise we took: 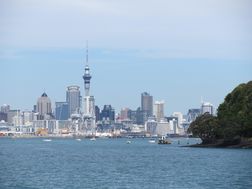 After a short stay in Auckland we hit the road towards the Hobbiton Movie Set, where parts of the Lord of the Rings and The Hobbit were shot. The closer we got, the more New Zealand started to resemble the Shire :)

New Zealand capitalizes enormously on the popularity of those two film series, so the entrance to the park wasn't cheap, but it was plain lovely to walk around the hillside with all those little Hobbit houses (in different sizes, btw., for ease of filming)! 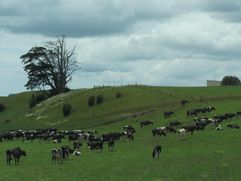 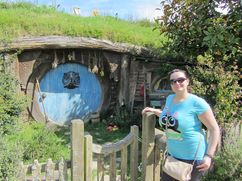 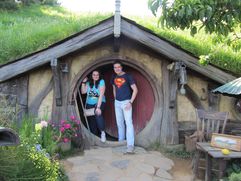 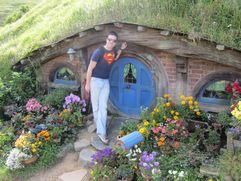 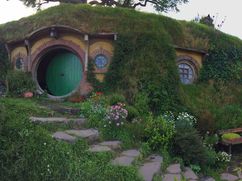 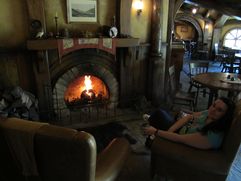 New Zealand has quite some geothermal activity, which created wonderful places like Waiotapu, with its Lady Knox geyser and Champagne pool.

Touted to erupt every day at exactly 10:15 (how?), we hurried to get on time to the Lady Knox geyser, only to find out an employee from the park actually sets it off by dropping soap into the vent… I expected some rumbling and then a huge and sudden jet spewing out from the ground, but instead the process started quite calmly: a bit of bubbling, some gushing, and then surely but slowly the jet made its way up, and just kept on going :) 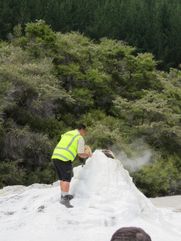 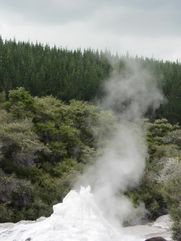 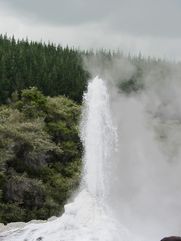 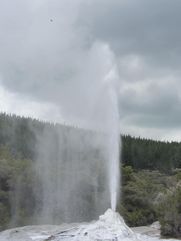 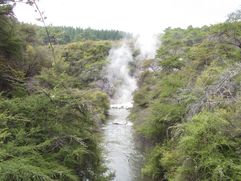 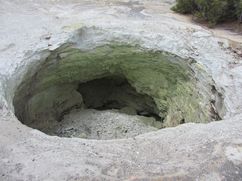 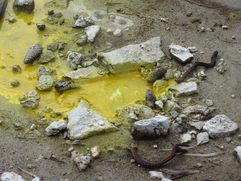 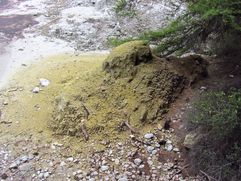 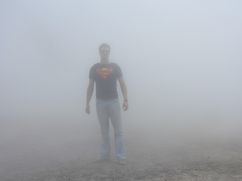 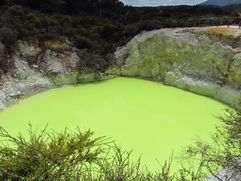 As if this day wasn't awesome enough, we suddenly drove past the gorgeous Huka Falls, swam a bit in Lake Taupo (chilly but/and cool :P), and enjoyed even more of New Zealand's amazing sceneries. 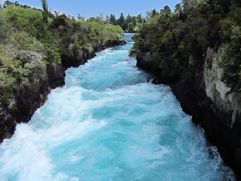 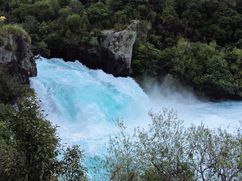 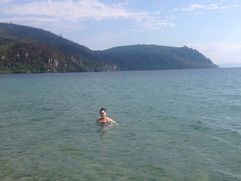 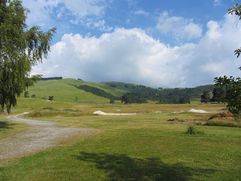 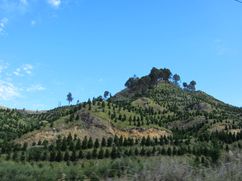 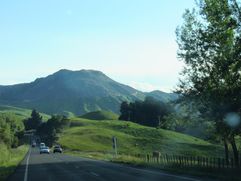 These were merely the first four days of our vacation. New Zealand may be far, but once you get there it's amazing, has about everything, and I could probably end up writing a book about everything we did :P

More will come soon in part 2, so stay tuned ;)