After another long drive (go cruise control!) we had reached Fox Glacier, which we'd be visiting by helicopter! Unfortunately due to heavy clouds our trip was canceled :(, so we decided to walk up to it, as far as we could.

As you can see from the meltwater the glacier is not particularly clean :P 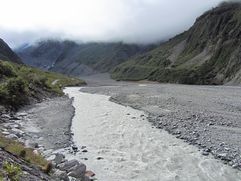 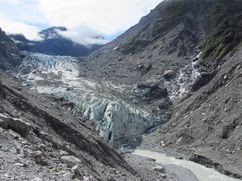 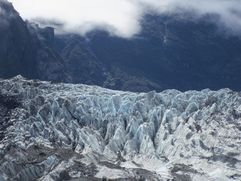 Lucky for us the weather had cleared up the day after, so we did finally go up! :D 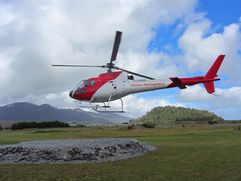 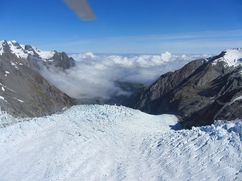 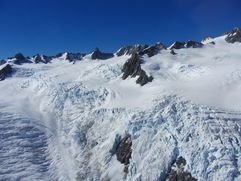 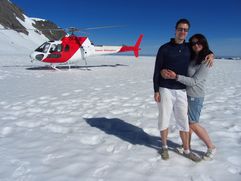 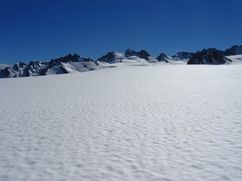 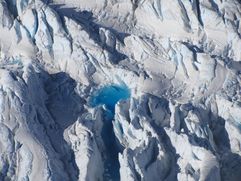 We had originally planned to go on a glacier hike, where we'd walk around the gletsjer for two hours or so, but in the end were happy we did the shorter tour: after ten minutes of playing around we didn't head straight back, but instead flew around some more! 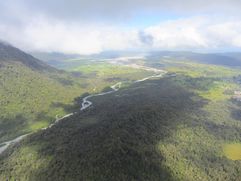 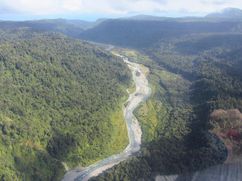 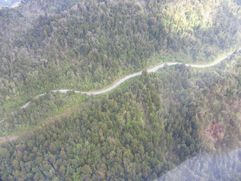 In the very southwest of New Zealand lies Doubtful Sound, "a very large and naturally imposing fiord". It's inaccessible by car, so we took a one-day cruise there. We first crossed Lake Manapouri: 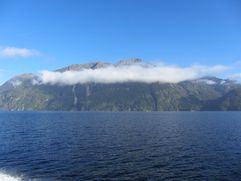 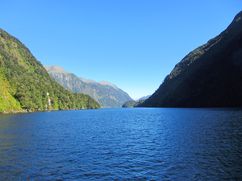 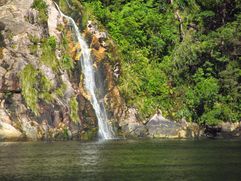 We then drove by bus to the second boat, and were explicitly told not to squash the sandflies on the windows :P The sandflies were even more numerous than they were in Abel Tasman National Park, and we could very well imagine the satisfaction one gets from squashing the annoying buggers…

The second boat trip was even more impressive than the first: we drove out to the open sea, and while we were driving a group of dolphins came to the boat and started to play around :D 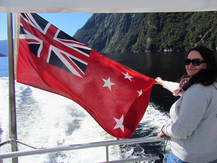 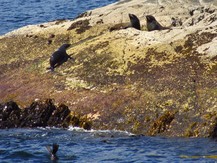 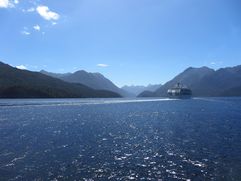 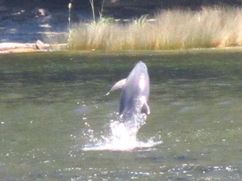 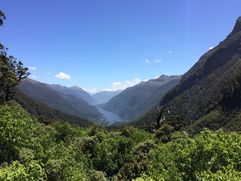 Before we could head back home, we first had to get back to Auckland. (Told you I'd get back to it ;) That evening we went to the Classic Comedy club, where we were assigned front-row seats. Hoorah… Like in the Netherlands, front-row seats means getting mocked, called up on stage, or both :P We were asked where we were from: At that time we had no idea about Aucklanders' attitude towards Hamilton, but my answer "I think we just drove right past it" couldn't've been more on the money, judging by this image of Hamiltonians :P

One of the comedians, as soon as he showed up on stage, started off with "So what about this terrorist attack in France, huh?", a mere two days after the attack… Can you say "shock humor"? But as the guy went on about the attack, along the lines of "there were like, what, 11 dead or so?", a voice from the back suddenly calls out: "eet was twelvuh actualie". "Oh crap, are you French? I hadn't really counted on that… Different topic? OK, different topic…"…

Besides this completely failed attempt the rest of the evening was great, and I even got called up on stage to assist in a card trick :)

The next day we visited the Auckland Art Gallery, which hosts the cubic structural evolution project, or in other words: thousands upon thousands of white Lego bricks to create with :)

Lastly my wife had arranged a high tea as a closure for our amazing trip, at the restaurant in the Sky Tower, about 190m from the ground, providing a spectacular 360° view of Auckland: 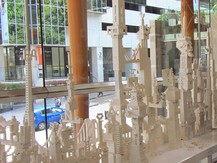 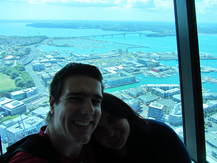 (So yeah, they do controlled jumps from the floor above :P)

The long way back

After three long and absolutely fantastic weeks in New Zealand it was time to go back home. But we first needed to get there. The first step back to Auckland had been made, but from the other side of the world it took us another two very long days to get home…

Fortunately it wasn't only travel, we had some great fun along the way too: we had another stopover in Taipei, an even longer one this time, so we visited Jeremy & Rebecca again, saw their new flat, and met up with his parents, where we had stayed during Chinese New Year last year.

After yet another 15h or so of flying, we had finally made it back, fully charged after an amazing vacation, and ready for work :)

Thank you, New Zealand, for an unforgettable vacation, thank you, Lee and family, for a great Christmas, and most of all, thank you, Alina, for making all this possible ;)

Like every country New Zealand has its "huh?s" and "ooh!s". Some are great, some not too much, and some make you think a bit :) (See also the Taiwanese version and the Russian versions.)