Added on Saturday, 2016-02-06 22:11 CET in category Traveling
Having friends abroad isn't always easy when you don't see each other very often, so we try to meet when we can: in Europe, Taiwan, Moscow or New Zealand. This time, we visited my wife's colleagues Irina & Fausto in Dubai.

Neither my wife nor I had ever been to the Middle East, which made the trip pretty exciting. At the airport the first thing that stood out were the locals: pretty much without exception the local men wore thawbs and keffiyehs (similar to long, white robes and headdresses), and the women abayas and hijabs (similar to long, black robes and headdresses). Once outside the airport, the second thing that stood out were the many giant skyscrapers, including the tallest one in the world: the Burj Khalifa. Combined with the warm weather and Arabic everywhere, this made for an impression anything unlike we'd ever visited before. Great :)

On our first day, Irina took us to the Dubai museum. It showcases an interesting display of Dubai's history, which can be (very crudely) summarized in two eras: pre-oil and post-oil. Before oil, Dubai was very small, and there was mainly pearl fishing and trade. After oil was discovered in the 1960s, Dubai experienced an enormous growth, but seems to have successfully recovered from the Dutch disease: only about 5% of Dubai's GDP comes from oil. 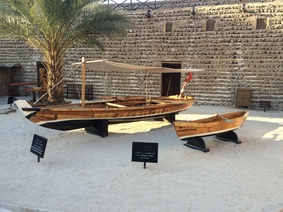 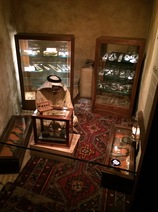 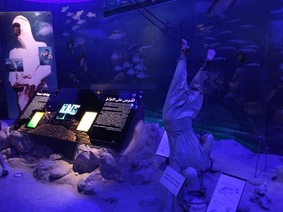 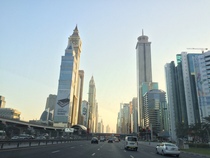 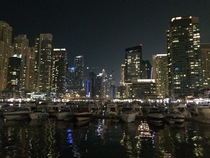 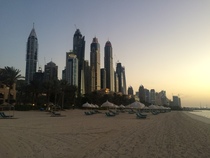 It probably comes as no surprise that Dubai as a city, and the United Arab Emirates as a whole, are very religious. Parts of the judicial system are based on sharia law, which comes with quite a few unusual consequences. E.g., kissing in public can lead to deportation, and living together before marriage to imprisonment. My wife and I therefore kept our distance in public…

The dress codes are quite conservative too. As we already saw at the airport, most locals wear clothing that almost fully covers them (except for the face and hands). The huge influx of foreign workers, about 85-90% of Dubai's residents are foreigners, has of course somewhat influenced what's acceptable and what's not. In general, keep shoulders and knees covered.

Because muslims can't drink alcohol, it's not that easy to come by for other residents either: it's quite expensive, and you need a license to buy and transport it (=take it home).

The modern center, with its gigantic skyscrapers, malls, wide roads, and sandy beaches, contrasts very strongly with the old center Deira, where we went by ferry the next day. The ferry costs next to nothing: 1 AED (~€ 0.25) one way. Once on the other side of the river, the narrow streets and very different architecture quickly made us feel as if in Agrabah. Interesting, of course, but not merely positive: apparently it's totally OK to blatantly ogle women, so instead of protection from the sun, abayas, hijabs and niqabs seem more like a protection from men with prying eyes who can't keep it in their pants…

The local souq (market place) proved somewhat interesting, and after haggling for silk and kashmir shawls we went back to the modern center.

Dubai is home to the tallest building in the world: the Burj Khalifa, which you may remember from Mission Impossible. From a distance it already looks quite impressive, but it's only when you're standing at the base and looking up that you really feel how ridiculously tall it is. At times we couldn't even see the top for the clouds!

The entrance to the tallest building in the world can of course be found in the world's largest mall (because, you know, where else?): the Dubai Mall. After a long security line and a long elevator trip (I could notice my ears pop from the pressure difference), we had made it to level 124, at a height of 452 m. The tower itself is 830 m, so we only made it to just halfway. It's possible to go higher, if you're willing to pay 3-4 times more, but even then you only get to 555 m. 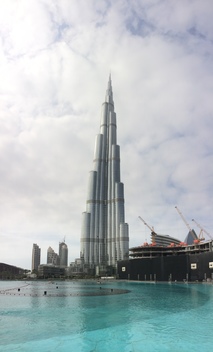 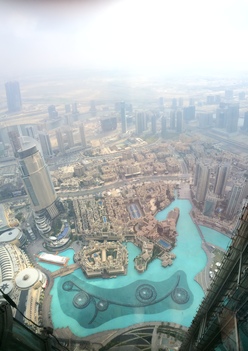 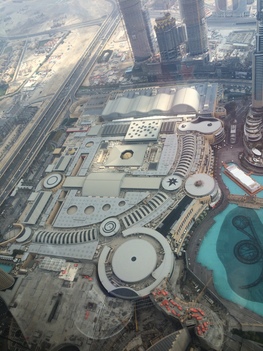 That's the Dubai Mall on the right; even from 452 m high up it only just fits on the picture.

Besides being the tallest, the Burj Khalifa sports another few records. That list gives a good impression of the overall feel of modern Dubai: everything has to be the biggest, highest, fastest, etc.

When we came back down we started wandering through the absolutely gigantic Dubai Mall. It's so big you're prone to get lost without a map. You could of course use the Dubai Mall app, which gives you turn-by-turn walking directions to where you want to go. The shopping itself wasn't as great as I was told: even on sale prices were still high. Walking around was quite nice too, though :)

Outside Dubai there isn't much but sand. Lots, and lots, and lots of sand. We took a one-day desert safari, part of which consisted of dune bashing: being driven around in a Toyota Land Cruiser through the dunes, being thrown left and right, up and down, and back and fro :) The drive was just slightly not nauseating enough to still be enjoyable, but the best part was when we got out and got to walk around.

The sand was fine as dust, pleasantly warm from the calm winter sun, and great to sandboard down from: 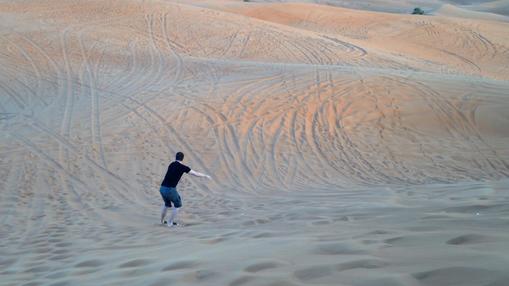 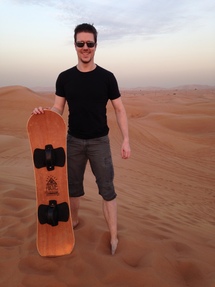 After sunset we drove to the Al Jabal "village", where we enjoyed a belly dance show, barbecue and camel riding: 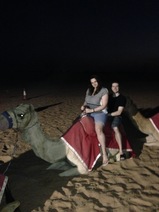 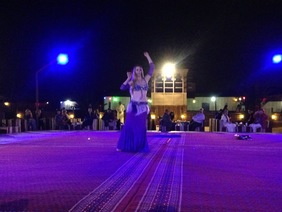 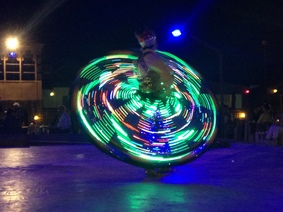 We also tried out the local thawb/keffiyah and abaya/hijab, which were surprisingly comfortable to wear: 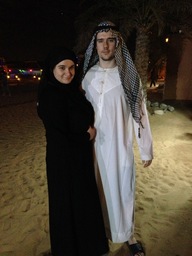 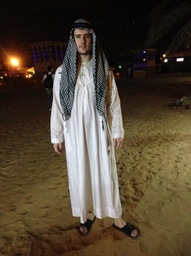 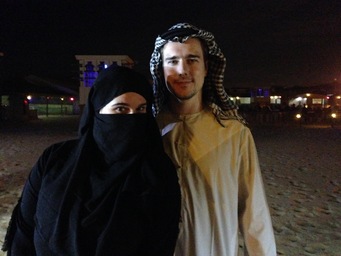 After a day of dune bashing, camel riding, and running through the sand, it was time for something more relaxing: a day of reading, swimming in the pool and enjoying a drink in the Madinat Jumeirah resort.

The weather that day wasn't particularly great, around 20°C and a bit windy. Still, we fancied a swim, and in we went. The poor life guard in the meantime looked at us in astonishment, as he sat trembling with his winter jacket and hat on… :D

For even more extravagance we drove to Abu Dhabi, the capital of the United Arab Emirates and wealthiest emirate. We first visited the Emirates Palace, which indeed feels more like a palace than a hotel. It sports huge wall carpets, and in case you felt like buying gold: a gold ATM.

Across the road we find the Etihad Towers, with an observation deck overseeing the Emirates Palace and the neighboring Presidential Palace. 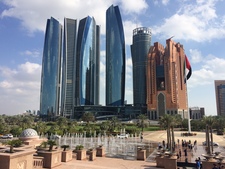 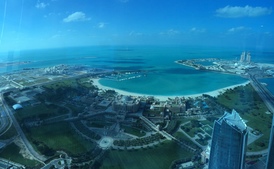 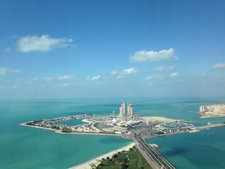 That's a mall on the right.

In the spirit of bigger, grander, and more extravagant we closed our day trip to Abu Dhabi with a tour around the Sheikh Zayed Mosque, where we learned a bit more about islam as well. E.g., the weekly prayer takes place on Friday, and hence the weekend consists of Friday-Saturday. Muslims pray 5 times per day, but the times depend on the lunar calendar, and vary from day to day. Hence every mosque has at least one minaret used for the call for prayer. On top of the minaret you can often find a moon, symbolizing the lunar calendar.

Every mosque also has at least one dome, but can have as many domes and minarets as the architect envisions. The number of these has no significance, other than architecturally.

The plans for the mosque were, as the guide put it, quite old: they stemmed from 1986! And although it's not the biggest mosque in the world, it had to have at least one world record, and it does: the carpet in the main prayer hall is the world's largest at ~5600 m². 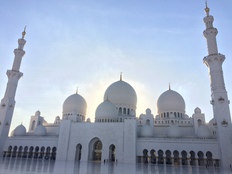 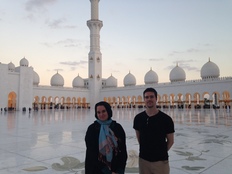 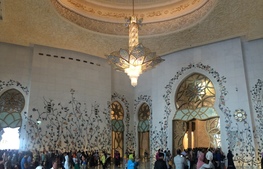 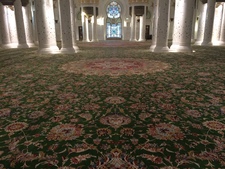 By now we'd seen most of Dubai's highlights, so we decided to have another relaxing day: we went for Turkish breakfast, had another swim in the pool, went shopping/karting, and after a lovely Italian dinner at home it was time to say goodbye, and head to the airport…

We'd hereby like to thank Irina, Fausto and their friends for showing us around, and spending an amazing week with us! :)

By tradition, I present: I'd like to dedicate an extra bit to Arabic writing, which was unusual to me in lots of ways. You probably know it's written right-to-left, but there's a lot more to it than that. (See also the Milanese version, New Zealand version, Taiwanese version and the Russian versions.)