Added on Thursday, 2019-06-27 11:28 CEST in category Zurich
About a month and a half ago we moved to Zurich, and like every move abroad we've gone through several stages: Admittedly we had a bit of a rough start: we were ill when we came to Zurich, and the weather would be rainy for weeks afterwards… It felt a bit like we did one step back from where we were, only to later do two steps forward.

We did manage to do a bit of sightseeing of Zurich and Switzerland, which are absolutely gorgeous! 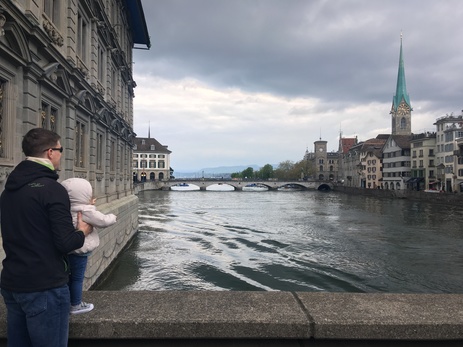 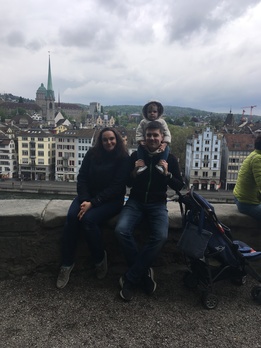 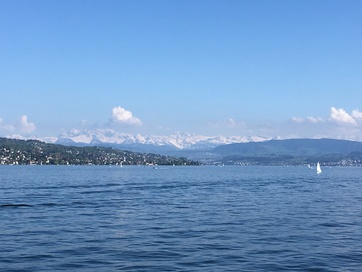 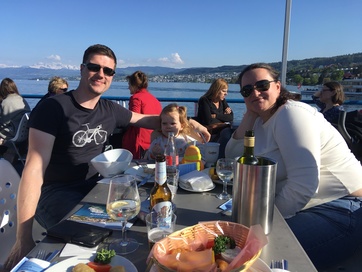 Because of the mountains the weather was very mercurial: one day we'd do a boat tour in just a t-shirt, and a few days later we'd be making a (mini) snowman :) 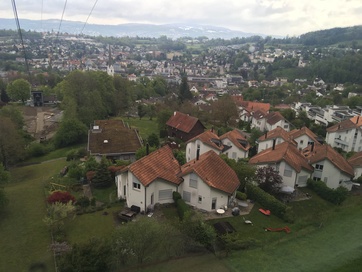 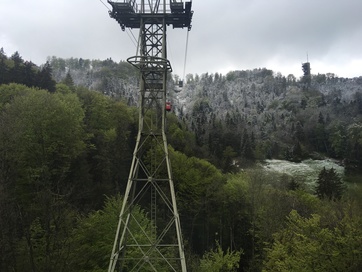 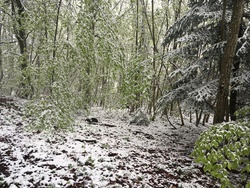 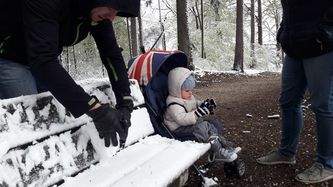 The snow on the spring foliage (bottom left just above) was something I'd never seen before, and gave the entire area of Felsenegg a very surreal feeling.

Another cool thing in the mountains were the waterfalls we saw left and right, seemingly springing from the clouds and trees themselves. 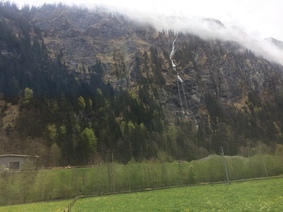 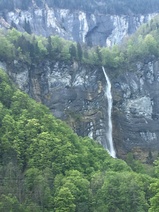 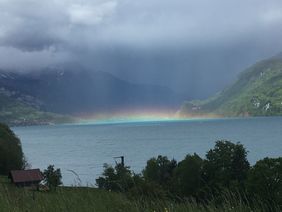 (And who could forget the rainbow over the lake? :)

You may know the Swiss speak Swiss German, but you may not know it and Standard German are not quite mutually intelligible. But presumably since Swiss German doesn't have a standardized written form, written communication and education is mostly done in Standard German, so the German-speaking Swiss speak both.

I've also noticed most people here speak decent English, but when they don't, my high school German from 20 years ago gets me a long way still :P

In the meantime I've started taking German classes as well, and have chosen to go for Standard German for now, which can also be of use in nearby Germany and Austria. Besides, I learn better visually, i.e., when I see things written down, so Standard German was the more obvious choice.

(Even though Switzerland has four official languages, people often only speak one of them.)

Like with every (international) move we had to do quite some paperwork (all in Standard German, btw. ;) Since we're all EU citizens, we can live and work in Switzerland, but of course do have to register.

During our registration we were asked if we'd like to register as Christians, which would mean having to pay a church tax. No, thanks :)

Besides the registration at our temporary accommodation, we had to get health insurance, register the car for eventual import, open a bank account, apply for child benefits, etc.

The processes overall worked quite well, but things did move slowly. It took about a month and a half before we got our local social security numbers. Things were also a bit different this time around in another way: when we moved to Moscow, Prague, and to Rotterdam we already had friends and/or family there, a place to live, and more or less knew how things worked. In Switzerland we didn't have much of a clue.

Perhaps the thing we were most taken aback by was the difficult housing market in Zurich.

Although Google provided us with temporary accommodation, we wanted to move into a more permanent home as soon as possible. For our daughter (and yes, a lot less for myself :P) we wanted to have a garden and lots of green around, ideally a house, not too far from work, with a bath, parking, amenities around, a private washing machine, the works :)

Yes, you read that right: a private washing machine. Switzerland may be one of the richest countries in the world, having your own washing machine is a rare luxury. Most apartment buildings have a common washing room where either you sign up for specific time slots, or you get assigned a specific day of the week when it's your turn to wash. Not home that day, because you work? Or your neighbor stole your slot? Well, that's too bad…

So we definitely wanted a private washing machine. And finding proper listings with most of our requirements wasn't so much the problem: we found quite a few good options. It was actually getting them that proved to be hard.

The housing market in Zurich is very tight: there is way more demand than supply, so it isn't uncommon for 50 people or so to show up for a single viewing… Some appointments we had for a viewing even got canceled, because the place was already rented out…

So we decided to look a bit outside of Zurich itself as well. (Since Zurich is relatively small, you can find plenty of villages within a 10 km range from the center of Zurich.) My wife found a very nice apartment with a private garden, balcony with a view, bath, parking, ameneties, the works :), so we applied. Our relocation agent suggested we write an introduction letter explaining why we're such good tenants to increase our odds… It was the worst :) If it was because of that we'll never know, but we did get it! :)

Even though we live a bit in the middle of nowhere now, we do have a direct bus connection to Zurich city center just around the corner. The bus fare is quite high, though, at € 6 one way, so instead of getting a Half Fare Travelcard, I'm very happy I get to cycle to work again (I hadn't done that since 2013, and missed it quite a bit.)

My route to work and back has about 240 m of elevation, though, and since I don't feel like arriving at work half dead every day, I bought an e-bike :) It's almost as if the mountain isn't there :)

Switzerland is known to be very expensive, and by and large that's true: we found prices on average to be ~50% higher than in the Netherlands. Fortunately you can easily bring down your cost of living significantly by buying items secondhand (often they're still under warranty!), or stocking up on groceries abroad (you can easily save € 100 after adjusting for petrol costs).

Switzerland's tax system also helps a lot: my tax rate is about half of what it was in the Netherlands, and VAT is only 7.7%.

The taxes you pay also strongly depend on where you live, since the cantonal taxes vary considerably. For this reason, a lot of people working in Zurich choose to commute from the canton of Zug, which has the lowest cantonal taxes.

The place you live influences other things as well: when we moved out of Zurich to our middle of nowhere, our health insurance premiums promptly dropped by 15%!